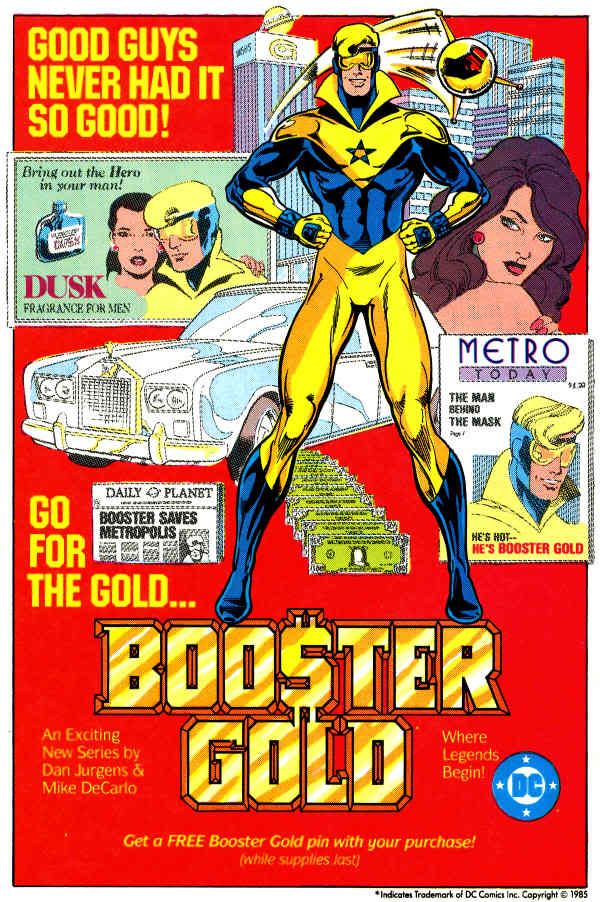 Booster Gold is the tale of a commercializing super hero and his robot sidekick, Skeets.

Booster Gold was created by Dan Jurgens. Jurgens also wrote and drew all 25 issues of Booster Gold. Prior to submitting his proposal for Booster Gold to the editorial board at DC comics, Jurgens had been a penciller for Tales of the Legion of Super-Heroes (1985). This is significant because the Legion of Super-Heroes play an important role in Booster Gold’s origin. This series also establishes Booster Gold’s main base of operations as Metropolis, which leads to Booster Gold interacting with various Superman supporting characters (including Superman himself). It’s interesting to note that Jurgens would eventually take over writing (and sometimes pencilling) duties for Adventures of Superman (from 1989 to 1981) and Superman (from 1989 to 1998). Maybe I should also mention that he was also the one responsible for the Death of Superman storyline in 1992 (this event was a big deal in my youth).

Reading this series, the events of Booster Gold seem to follow along nicely with the rest of the events going on in the DCU at the time. Issues #12 and #13 are indirect Legends cross-overs and issues #24 and #25 are direct Millineum cross-overs.

My earliest exposure to Booster Gold was in Keith Giffen’s Justice League, so I wasn’t really sure what to expect. Jurgens takes a really interesting concept and runs with it. Time travel plays an important part in Booster Gold’s backstory (and if you don’t why I’ll let you discover for yourself when you read it), which was an element that Giffen’s JL totally glazed over.

Jurgens had mentioned before that the problem with writing this series was that the main character was very unlikable character to begin with, and the challenge was to make the series more ‘readable’. Jurgens manages to evolve the character of Booster Gold throughout the 25-issue run of the series, and actually keeps the reader caring/interested in the fate of Booster Gold and his supporting cast. Jurgens also re-introduces a few Silver Age characters back into the post-Crisis DCU (i.e.: Rip Hunter and Rose & Thorn), which is always a treat. Presidents Reagan and Bush even make appearances in issues #8 and #9 (very 80s). Somewhere around the midway mark of the series, with sales lagging, a decision was made to darken the atmosphere of the series to hopefully spark some fan interest. Unfortunately readership did not pick up and the series was cancelled at issue #25 – Booster Gold was written in as a major player in the Millineum cross-over to smooth the blow.

Giffen’s Justice League and subsequent Justice League International and Justice League America were really REALLY popular books in the late 80s/early 90s and brought Booster Gold a lot of attention. I can’t/don’t understand how Booster’s series got cancelled in 1988. After his series cancellation he was still a prominent character in those aforementioned books except that he was relegated to Blue Beetle’s sidekick.

Luckily, if you are looking to collect this series, it’s available in the Showcase Presents: Booster Gold, v1 TPB. This TPB collects all 25 issues of Booster Gold v1 (including his cross-over in John Byrne’s Action Comics #594) reprinted in black and white.

This entry was posted in original and tagged 1985, Booster Gold, Dan Jurgens, Jurgens. Bookmark the permalink.